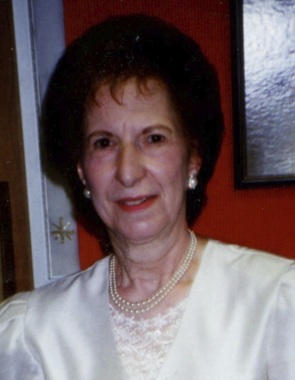 Back to Thressa Augustine's story

Thressa Augustine McCree, 90, formerly of Hillsville, passed away on Feb. 11, 2020, at The Hospice House in Poland, Ohio.
Born on Sept. 28, 1929, in Hillsville, she was a daughter of the late Frank and Rose Pasqualino Augustine.
On June 25, 1993, she married her beloved husband, Marcel (Marshall) McCree Sr. He preceded her in death on April 24, 2003.
Thressa had worked as a loan clerk and teller for the former First Seneca Bank, retiring after 35 years.
She was a member of Holy Spirit Parish.
Thressa enjoyed doing crossword puzzles and visiting casinos.
Thressa is survived by her stepchildren, Marsha Covert and her husband, Bob, of Mount Jackson, Laurie Cherol and her husband, Frank, Joseph McCree and his friend, Janet Marstellar, and Marcell McCree Jr. and his wife, Sue, all of Poland, Ohio, and Patrick McCree of New Castle; eight step-grandchildren; and five stepgreat-grandchildren.
In addition to her parents and husband, Thressa was preceded in death by her stepgrandson, John McCree.
Visitation will be held from 3 to 5 p.m. on Friday at the Ed and Don DeCarbo Funeral Home and Crematory, 3000 Wilmington Road.
A Blessing Service will be held at 5 p.m. on Friday at the funeral home. Deacon John Carran of Holy Spirit Parish will officiate.
Burial will be in St. Lawrence Cemetery.
Online condolences may be offered to the family at www.decarbofunralhome.com.
Published on February 12, 2020
To send flowers to the family of Thressa Augustine McCree, please visit Tribute Store.

A place to share condolences and memories.
The guestbook expires on May 12, 2020.