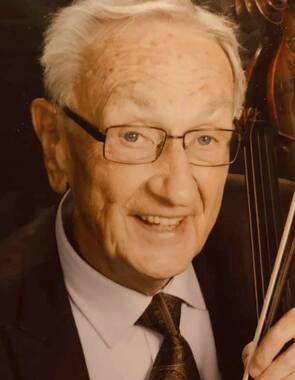 Back to Tom's story

Tom Morrison Wiand was born on December 10, 1930 in Niles, Ohio. His father, Harold Edger Wiand was a foreman of a track crew on the Pennsylvania Railroad. His mother, Sara Mae Wiand, was a schoolteacher until she married. Tom was their only child and was well loved.

When Tom was 10 years old, the Wiands moved to New Castle, PA, where Tom grew up. His elementary school formed a school orchestra. When his mother took Tom to select an instrument there were only two left - a clarinet and a cello. Tom selected the cello and it remained his life-long passion and ministry. In high school, Tom won first chair in the All-state Orchestra and attended National Music Camp at Interlochen, MI. He then went to Baldwin-Wallace College in Berea, OH, where he majored in music education.

By the time Tom graduated from college, the United States was already in the Korean War. But Tom went off to Haiti, SD, where he taught band and choral music for one year. Then Tom was drafted into the United States Army where he played in the 7th Army Symphony Orchestra for the next two years. He also conducted the 11th Airborne Division Band and Chapel Choir.

When he left the Army in 1956, Tom decided to go to Dental School at the University of Pittsburgh. That is where he met Nancy, his wife. He graduated from dental school in 1960 and practiced dentistry in New Castle, PA, for the next 46 years where he has a private practice, was dentist for the New Castle Public Schools and for the City Rescue Mission.

While Tom was a fine dentist, he never lost his love of music. Over the years, Tom sang in many church and community choirs. He was the choir director for the First United Methodist Church in New Castle for six years. There he also formed and directed a church orchestra for 16 years that had two professional violinists, many fine amateur musicians, and high school student musicians whom the group mentored along.

Since moving to Scottsdale, AZ, in 2006, Tom's musical endeavors continued. He mentored elementary string students at Laguna Elementary School for seven years, played in bell choirs at Los Arcos United Methodist Church, Creighton United Methodist Church, and Shepherd of the Desert Lutheran Church. His wife, Nancy, is a church organist who substitutes all over the Valley. She always took Tom with her so that many congregations have been blessed by his ministry of music. His greatest musical joy perhaps has been playing in the Scottsdale Philharmonic Orchestra since its inception eight years ago.

Tom loved the Lord Jesus Christ. He was a long-time member of the Full Businessmen's Fellowship, both Youngstown, OH and New Castle, PA chapters and a past president of the latter. He has been a counselor for the Pittsburgh Billy Graham crusade. He was coordinator for the Graham Time to Run movie in New Castle. He did a summer medical mission trip to North Carolina for the Western PA Presbytery. He was currently a member of the Shepherd of the Desert Lutheran Church in Scottsdale.

Tom passed away on February 13, 2020 after 14 months of many health challenges. Tom is still giving in his death. He donated his body to the Midwestern University College of Medicine in Glendale to foster the learning of the doctors of tomorrow.

In lieu of flowers, the family suggests that donations be made to (1) Shepherd of the Desert Lutheran Church (www.sotdaz.org), (2) the Scottsdale Philharmonic Orchestra (www.scottsdalephilharmonic.com), or (3) Smiles and Beyond (www.smilesandbeyond.org) - a nonprofit organization that provides the gift of restored smiles to women and men who have experienced incarceration or domestic violence and are committed to rebuilding their lives.
Published on February 20, 2020
To plant a tree in memory of Tom Morrison Wiand, please visit Tribute Store.

Plant a tree in memory
of Tom

A place to share condolences and memories.
The guestbook expires on May 20, 2020.

Mira Thompson
To Nancy and your family, I send my heartfelt condolences. I loved Tom from the 1st moment that I entered the choir room at FUMC in New Castle! I was inquiring about joining the choir. In the next 5 minutes, he gave me music, explained what we did and when and then he had me fitted in a robe. Nancy and Tom opened their home to me and my 3 kids on our 1st Christmas when they found out that my then-husband was on duty with the Coast Guard and would not be home. My girls both played in the orchestra and sang in the choir because of Tom. I will always cherish both Tom and Nancy for the love that they showed us.
Jerry Pollack
Tom was a dear friend of mine, dating to our time together in the 7th Army Symphony Orchestra. He was a wonderful musician and a kind, thoughtful human being. Regrettably, our paths diverged after our Army days, but we were able to maintain our friendship even at a distance, and we greatly enjoyed the opportunities that presented themselves for us to have reunions. I wish we had been able to see more of each other while there was still time.
Mildred
Jack and I loved being in the choir at First Assembly when Tom and Nancy both played organ a d orchestra-had lovely dinners in their home-they loved Jesus
Jeannette Missey
Dear Ones; I remember well how well he played and how he loved it in our church many years ago. I'm sure he is enjoying the music in heaven with all those that have gone before. Thank You Lord the blessed hope we have in Jesus. Our thoughts and prayers are with all the family.
Jaala (Fish) Haskins
Tom was one of many influences in my life for music. He was also my dentist when I was a child. He and his wife, Nancy were also my biggest encouragers when it came to my challenges as a teen torn between serving God and dealing with my personal issues. I am saddened to hear of Tom's passing, but glad to know he is in heaven playing his cello for the Lord with joy! My love and prayers sent to the family at this time of loss.
Randall Surface
Tom could always make me laugh, I loved playing music in the symphonic ensemble that he and Nancy pioneered at First United Methodist Church in New Castle,PA. He was a dear mentor and friend and he was missed when he first moved to AZ. My heartfelt sympathy to Nancy and family.
Neil and Jane Benson
Dear Nancy and Family, We extend our sympathy, our heart felt greetings and our prayers to you as you celebrate brother Tom's home going. What a wonderful and full life lived and we give God the glory. As neighbors for over 25 years, we experienced your family in a real and personal way as our children grew up together. In behalf of all our family, we send our love and prayers. In Jesus name and for His glory, may you be comforted and challenged in the days ahead to honor and continue Tom's heritage.
Ms. Carol Jean Gill 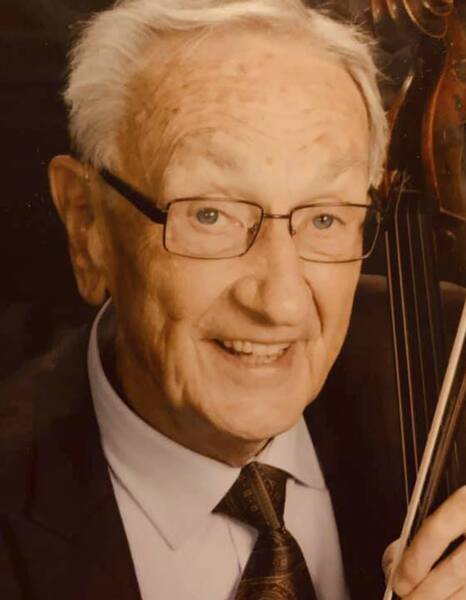